When the researchers experimentally "posteriorised" pectoral fin buds of catsharks, the fins lost anterior skeletal elements, and showed a single bone connected to the pectoral girdle, as seen in fossil Tiktaalik pectoral fins Fig. These results suggest that one of the key genetic events during the fin-to-limb evolution was a shift of the balance of the anterior and posterior fields a "posteriorisation" and loss of anterior skeletal elements Fig. Further research involving genome-wide studies, particularly into the role of Gli3, will help explore these results more fully.

Background Fin-to-limb evolution and anterior-posterior patterning The earliest land-living creatures evolved from ancestral fishes, when fins transformed into limbs. Determining precisely how early tetrapods evolved, and in particular how fin-to-limb transformation occurred, has long proven difficult for scientists. During limb development, the embryonic cells are allocated and determined for specific roles and positions, gradually building a correctly-formed limb. Part of this process includes so-called 'anterior-posterior patterning' - the determination of where individual parts of the limb bud develop along the anterior-posterior axis thumb-pinky axis.

Previous research had divided the skeletal elements of shark pectoral fins into three parts along the anterior-posterior axis.

In lobe-finned fish and tetrapods, however, two of the three segments - the anterior-positioned ones - had disappeared. This suggested that anterior-posterior patterning, and the genes which determine such positioning of skeletal elements, may play a key role in fin-to-limb evolution. A key anterior-posterior patterning gene is Gli3 - a transcriptional factor which is known to control genes involved in creating fingers and toes, although little is understood about its full role in skeletal patterning of fins and limbs.

Given its link to skeletal patterns, determining the exact role of Gli3 is an important future goal for scientists, and may prove invaluable in understanding fin-to-limb evolution. They analysed expressions of anterior-posterior patterning genes, and found that the anterior field was larger in catshark fins than in mouse limbs.

How Limbs Evolved From Fins

Then they found that the shift of the balance of the anterior-posterior field was caused by changes in transcriptional regulation of a key anterior-posterior patterning gene, Gli3. When Onimaru experimentally posteriorised the catshark fins, the resulting fins lost parts of their anterior skeletal elements and showed a single basal bone connected to the pectoral girdle.

Future work Future work involving systematic genome-wide studies would help expand on the current research. As mentioned, little is known about Gli3 regulation, even in mice, and so systematic studies of the precise genetics behind the development of limb skeletal structure is needed.

About Tokyo Institute of Technology As one of Japan's top universities, Tokyo Institute of Technology seeks to contribute to civilization, peace and prosperity in the world, and aims at developing global human capabilities par excellence through pioneering research and education in science and technology, including industrial and social management. To achieve this mission, we have an eye on educating highly moral students to acquire not only scientific expertise but also expertise in the liberal arts, and a balanced knowledge of the social sciences and humanities, all while researching deeply from basics to practice with academic mastery.

Through these activities, we wish to contribute to global sustainability of the natural world and the support of human life.


The mission of the CRG is to discover and advance knowledge for the benefit of society, public health and economic prosperity. The breadth of topics, approaches and technologies at the CRG permits a broad range of fundamental issues in life sciences and biomedicine to be addressed. Nearly scientists from 42 different nationalities work at the CRG on multidisciplinary projects, focusing on a broad range of topics: stem cells, epigenetics, cellular and developmental biology, genomics, cancer, systems biology, to name a few.

Researchers receive strong support by cutting-edge technological platforms. Over publications in high quality journals are published every year, and researchers are also active in facilitating the transfer of new basic findings into products for society. The CRG is devoted to excellent training at all the stages of a career in life sciences. Brian K. 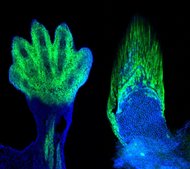 Long ago, fish fins evolved into the limbs of land vertebrates and tetrapods. During this transition, some elements of the fin were carried over while new features developed. Lizard limbs, bird wings, and human arms and legs are therefore all evolutionary modifications of the original tetrapod limb. A comprehensive look at the current state of research on fin and limb evolution and development, this volume addresses a wide range of subjects--including growth, structure, maintenance, function, and regeneration. Divided into sections on evolution, development, and transformations, the book begins with a historical introduction to the study of fins and limbs and goes on to consider the evolution of limbs into wings as well as adaptations associated with specialized modes of life, such as digging and burrowing.

Fins into Limbs also discusses occasions when evolution appears to have been reversed--in whales, for example, whose front limbs became flippers when they reverted to the water--as well as situations in which limbs are lost, such as in snakes. With contributions from world-renowned researchers, Fins into Limbs will be a font for further investigations in the changing field of evolutionary developmental biology. Passar bra ihop.

Wings, Legs, and Fins: How Do New Organs Arise in Evolution? with Neil Shubin